BlubberPatrol for Android is an app designed to make recording your weight each morning as quick as possible. In less than 60 seconds, you can punch in the number and have an updated chart. You only see two things on your screen: a box to enter your weight, and a daily, weekly, monthly, or yearly chart. Here is BlubberPatrol running on a tiny “Froyo” phone: 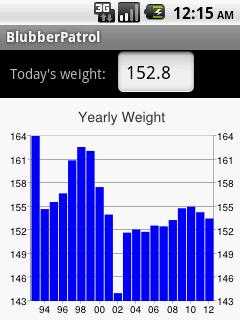 Here it is running on a “Jelly Bean” tablet (click image to enlarge): 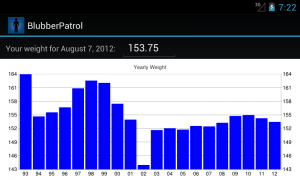 Notice that I have kept my weight between 152-155 for the last 10 years. The secret? Eternal vigilance. And nothing is better for staying vigilant than looking at a chart each morning. BlubberPatrol makes daily, weekly, monthly, and yearly charts so that you can stay aware of both short-term and long-term trends.

Show Data – This command will show the data points plotted on the chart. And that can be different from what the “Edit Data” command shows you in two ways. First, you can enter more than one decimal point when entering your weight, but charts are rounded-off to one decimal place. Second, the weekly, monthly, and yearly charts are averages while the data stored in the database is daily – one record for each day. It’s confusing at first, but it makes sense once you think about it.

Edit Data – This command lets you edit one weight record at a time so that you can correct any errors that you may have made. It will always show you the same list of days from which to choose. For example, you can’t edit the values on the yearly chart because those values do not exist in the database, but rather are calculated from the daily records.

Export Data – This command will put all of your weight data into a text file named “blubber-export.txt” in your “Download” folder. If you want to copy the file to your computer via USB, you may have to reboot your Android device before it will show up on your desktop. The file is “tab delimited”, so each line has the date, then a tab, and then the weight for that day. You can easily open the file with a word-processor or spreadsheet program like Excel.

If you export again, the previous blubber-export.txt file will be over-written. So, move it, or rename it, if you want to save it. In most cases it won’t be an issue because you will still have all your data inside the app.

Import Data – This command will look for a file named “blubber-import.txt” in your “Download” folder, and then load in its data. If you want to start fresh with the data that you import, you can delete all of your existing data by uninstalling/reinstalling the app, then using the “Delete Sample Data” command. If you keep your existing data, the new data imported will not over-write your existing data in cases where a day already exists. Since there can only be one weight per day, duplicate days in the imported data will not be saved.

The data must be in a tabbed-delimited format with one day per line: first the date in YYYY-MM-DD format, then a TAB, then the weight. To see what it should look like, use the Export Data command first and examine the blubber-export.txt file.

This feature works, however it is not tuned for high performance. I’m guessing that you won’t be using it very often. So, if you are going to import a lot of data, set aside some time where you won’t be needing to use your device for other things.

If the program can’t understand any of the data, it will tell you at the end: “Could not parse x record(s).” If x is a large number, you will probably want to fix your data and re-import it. If x is a small number in a large amount of data, letting those records go won’t likely make a visible impact on your charts. You can make a new blubber-import.txt file with just the fixed records, and import it, and only those records will be added to the database – the records don’t have to be imported in date-sequence.

If something goes wrong during a lengthy import, such as your battery dying, just do the import again. BlubberPatrol will skip the records already imported and resume with the remainder. You don’t need to edit your import file; no duplicate records will be created.

Hardware Support – I tested BlubberPatrol extensively on all Android platform versions going back to 2.1. So that’s Eclair, Froyo, Gingerbread, Honeycomb, Ice Cream Sandwich, and Jelly Bean. I tested on my tablet, which has Ice Cream Sandwich, and used Google’s emulator to test the rest. If the Play Store lets you install it, it should run on your device. Of course, there are literally thousands of different Android devices out there, so I’m sure somebody will encounter a problem. If you do so, please write a comment below.