Here is a chart of my account from my broker’s website. I am the green line, and the S&P 500 is the blue line: 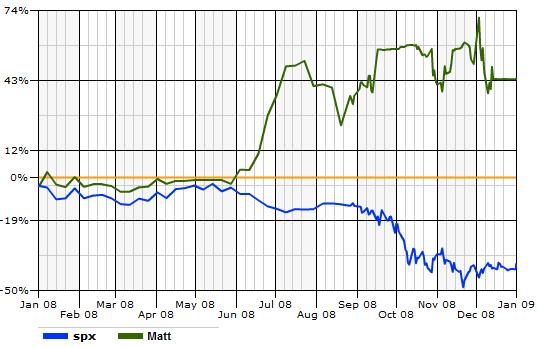 That’s my large retirement account. To be exact, I was up 43.63% during one of the worst years in history. In my smaller taxable account, I was up 50.10%. I don’t have a chart for the smaller account because it lived at three different brokers, but I imagine it would look about the same as the chart above.

Notice that my high-water mark was around 73%. That peak was on December 1st, which was one of the largest percentage drops in stock-market history. I saw it coming. I was massively short. I had absurdly huge profits on that day, but… I failed to ring the register. I studied the volume to see if the decline would have legs, and it was a toss-up. I decided to stay short, and that turned out to be the wrong decision. The moral of the story is that when you see gigantic profits appear in your account, it’s almost always a good idea to take them.

Also note that my performance flat-lined during the last two weeks of December. That’s because I was in cash making sure to lock in my bragging rights! And it was worth it! Look how much fun I having now!

Needless to say, in my first year of full-time trading, I have crushed just about every mutual fund, hedge fund, and legendary investor in the world. Here’s a quote from Bloomberg:

“Just six of the 1,611 U.S. mutual funds that invest in stocks and have more than $250 million in assets gained in 2008, according to data compiled by Bloomberg. Among them is Grantham Mayo Van Otterloo & Co.’s $2.04 billion GMO Alpha Only Fund, which returned 12 percent.

Jeremy Grantham, who helps oversee more than $107 billion as chairman of Grantham Mayo, in January recommended shunning stocks and holding cash because of the burgeoning crisis. Dubbed a “perma-bear” for his dour view on U.S. equities for more than a decade, Grantham correctly predicted the crash in technology shares two months before the bubble burst in March 2000. “

Note to Jeremy Grantham, Ken Heebner, Warren Buffet, Ben Bernanke, etc: I will give you lessons, but its gonna cost you! You could all fly over to my place in one of Ben’s helicopters filled with freshly printed fiat money!