Conspiracy aficionados are enamored of Stanley Kubrick’s 1999 film Eyes Wide Shut. They believe that Kubrick showed us an authentic Illuminati ritual, and exposed the evil nature of the group. However, while I’m not disputing the occult content of the movie, I assert that the net effect of the film on the millions who viewed it was to make the Illuminati look mostly harmless. 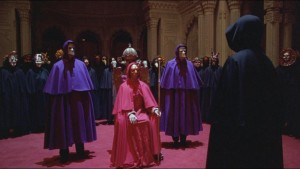 Tom Cruise, in the black cloak on the right, gets the third degree from Kubrick’s Illuminati.

Kubrick’s Illuminati doesn’t do anything flagrantly evil. They hire hookers; they rough-up a piano player; they follow Dr. Bill on the street, and they threaten Dr. Bill in a politely written note hand delivered by a butler. You call that an Illuminati? Ha! In its heyday, Italy’s P2 lodge did more crime before breakfast! Compared to the Sopranos, Kubrick’s Illuminati are a bunch of choir boys. Kubrick would have us believe that the Illuminati is just a bunch of weirdo swingers. And he gives us no hint as to who the Grand Poobah in the red robe is. It’s got to be a banker, right?

In fact, the entire movie exhibited glacially slow pacing; almost as if Kubrick was trying to hypnotize us. I mean, here we have Tom Cruise being captured by a sinister secret society, and there is no action in the movie at all. And no laughs either – that might break the hypnotic spell. And it goes on and on and on for an incredible 159 minutes which feels like double that length. Eyes Wide Shut will literally put you to sleep – despite the fact that it is loaded with naked chicks!

“You’re getting sleepy, very sleepy. When you wake up from this boring movie you will believe the Illuminati is harmless.”

And it’s not a joke, because when a genius director like Kubrick makes a boring movie, it’s not an accident. Ladies and gentleman, I submit to you: EWS is a psy-op just like Tinker, Taylor, Soldier, Spy.

Now, there is a character who pimps out his underage daughter (Milich at the costume shop) however he isn’t portrayed as a part of the Illuminati. And even there, the girl is game, so that makes it look less sinister. So Kubrick also whitewashes pedophilia, one of the Illuminati’s favorite pastimes.

Let’s look at a creepy subplot. In the frame below, we see two characters that we might call Square Head and Round Head at the 12:55 mark (click image to enlarge): 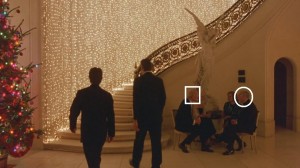 They are sitting at a table at the foot of the stairs, possibly as guards. The guy on the left has a square-ish head. The guy on the right has a rounded head. Perhaps Kubrick chose their distinctive head shapes so that we would recognize them more easily later in the movie. They have no lines. Their appearance here is significant because this is where Dr. Bill (far left) first learns that the Christmas party is less than wholesome. At the top of the stairs, he finds the host, Victor Ziegler, with a hooker who just overdosed.

The next time that we see Square Head and Round Head is at the end of the movie (2:30:35) in the toy store: 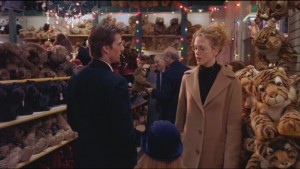 Kubrick puts them dead center to make sure that we get a good look. While Bill & Alice distract us with the boring, anti-climactic end of the film, we imagine their daughter Helena following the Illuminati operatives out to the creeper van. Now that’s alarming, but even here it’s not as sinister as it seems. First, Square Head and Round Head are not snatching the child. Second, before Helena follows them out of sight, she looks back at her parents, seemingly for approval: 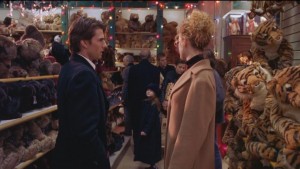 Dr. Bill & Alice are not concerned at all. In fact, they dreaded the idea of taking her Christmas shopping, and acted indifferent as she enthusiastically picked out toys. For the remaining three minutes of the film, Bill & Alice don’t so much as glance in the direction of the last whereabouts of their child, displaying parental negligence. And finally, this sequence of events is so subtle that very few, if any, theater-goers probably noticed it at all. And so Kubrick softens the blow of the Illuminati’s acquisition of under-age sex slaves. He makes it look peaceful and voluntary, and perpetrated on parents who might deserve it.

As to the film’s title, I understand that the phrase is the Illuminati equivalent to the Mafia’s: “you didn’t see anything.” And we didn’t see Dr. Bill ever notify the authorities: he didn’t call 911 for the hooker who overdosed, he didn’t notify the police about Milich pimping out his underage daughter at the costume shop, etc. He kept his eyes wide shut, and the title of the film should be understood as a command from Kubrick to yourself. If you ever see any Illuminati crime, just dummy up like the great movie stars Tom Cruise and Nicole Kidman.

So, the conspiracy community needs to calm down about EWS. Indeed, a complete re-evaluation of Kubrick’s body of work from a less-credulous perspective is in order. I submit to you: not only are Dr. Bill’s eyes wide shut, but so are Mr. Kubrick’s. Another example is the famous Ludovico Technique shown in Kubrick’s film A Clockwork Orange: 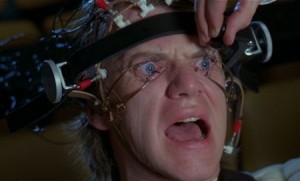 In the film, this form of torture is used to cure Alex, the violent psychopath. But in real life, the London Times reported that Lt. Commander Thomas Narut of the U.S. Navy used the technique to do the exact opposite: to train assassins.

The moral of the story is that when a member of the esoteric world makes a film for us out here in the real (exoteric) world, he’s probably not doing us a favor. Rather, he’s probably running a psy-op on us.

Note on the boring plot of Eyes Wide Shut: the conflict between Alice and Bill begins when Alice ditches Bill at the party, chugs down a glass of wine, and goes to flirt with a guy at the bar. So, she starts it. Bill makes it worse by telling Alice a white lie about where he disappeared to at the party, keeping his eyes wide shut even with his wife. Though Bill didn’t cheat on his wife at the party, Alice knows that he is lying about something, and proceeds to go berserk on him, torturing him with all kinds horrible tales of infidelity.