If you see an NFL player, you should not ask him for a selfie. Instead, you should recoil in horror, and shout at him to get back in his bubble. Or at least, that’s what a little troll by the name of Anthony Fauci might advise you to do.

For some ridiculous reason, the NFL asked Fauci for advice. Predictably, Fauci told them to close up shop:

“Unless players are essentially in a bubble — insulated from the community and they are tested nearly every day — it would be very hard to see how football is able to be played this fall.”

Fauci acts as if there is no such thing as antibodies. And while the jury is still out on the exact behavior of COVID-19 antibodies, I think it’s safe to say that they do indeed exist. Otherwise, we would have thousands of people suffering from multiple infections; something that has not been observed.

So, I personally wouldn’t be the least bit worried about taking a selfie with Ezekiel Elliott. Here is what he said about his battle with COVID-19:

“I would say I had maybe one or two days when I felt symptoms. Even then, it wasn’t too bad. I had a cough and a little bit of shortness of breath. Now, I feel good. I feel normal.”

Hardly the end of the world, right? After all, this is football we’re talking about – a game that is literally the equivalent of being in a car crash – weekly. Broncos’ superstar Von Miller, who suffers from asthma, had it worse than Elliot, but even he will recover much faster than he did from the torn ACL he suffered in 2013.

So, which would you prefer? To be sacked by Cleveland Browns’ defensive-end Miles Garret, or get infected with COVID-19? Miles would snap my spine in two, so I would take my chances with COVID-19.

President Trump slapped down Fauci right after the bubble comment, so the NFL is safe for now. However, that may not last. First, kneeling players may cause Trump to withdraw his protection. Second, a Biden victory in November might spell the end of football mid-season. Third, the NFL Players Association may pull out the old “abundance of caution” and order its players to surrender. Fourth, the NFL might simply run up the white flag as the COVID-19 hype reaches deafening levels.

Prepare to be terrorized like you have never been terrorized before. Take a look at this official CDC map (click to enlarge): 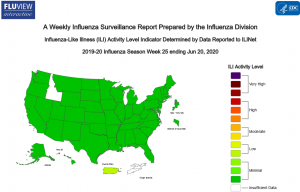 The whole country is green, and considering the current media hype, green must mean that everybody is dying, right? Wrong. Green means that, statistically, nobody is sick enough to go to the doctor. Here is what the chart looked like back in February 2020: 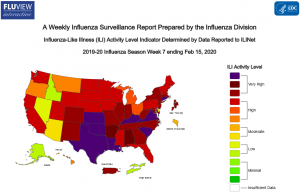 Now that was a problem. But today? It’s smooth sailing.

Those maps are made from data collected by the U.S. Influenza Surveillance System – one of the fabulous things our hard-working government bureaucrats produce for us. Go to this page and play with the interactive map yourself.

The map probably won’t begin to heat up until around Election Day, when the weather gets cold, and people start staying inside and breathing on each other all day.

There is a lot of pressure on the NFL right now, during the summer when nobody is sick. Imagine how intense the pressure will get when flu season starts, and people get sick for real.

Furthermore, it’s entirely possible that the NFL will save more lives than it takes by playing the 2020 season. Back in May, doctors at John Muir Medical Center in Walnut Creek, California reported that they had more suicide deaths than COVID-19 deaths during the lockdown. It turns out that being isolated, locked-down, and terrorized by constant media propaganda takes a toll on many people who then look for a way out.

But, if you have the NFL to watch, you will at least be able to enjoy a few hours of your life every week during the inevitable second lockdown. And that will likely save some lives.

In other words, the NFL is likely to be medicinal. It should be provided to the public just like Vitamin D. And while players make more money than Trader Joe’s clerks, they should still be lauded for their service.

They will shut the NFL down if they can, so fans will need to fight for their right to party. Write to your congresspersons, your governor, and your mayor, and make sure that they know that the only way they can get your vote is if you can watch Nick Chubb trample DBs like they were so many bowling pins every Sunday.