These charts show the number of Americans receiving food stamps as reported by the United States Department of Agriculture. As of the latest data released on May 8, 2020 the total is 36.8 million. If our food-stamp population were a separate country, it would rank at #40 among the world’s 233 countries. (See the list here.)

Note: the USDA reports this data with a lag, so the coronavirus impact is not yet reflected. 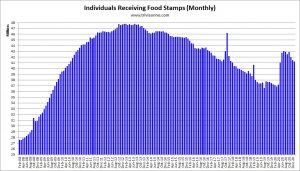 The second chart shows annual totals back to 1975: 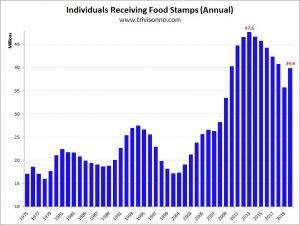 Note: The chart above is the average size of the food-stamp population over the year.

The next chart shows the number of people added or removed to the food-stamps program each month: 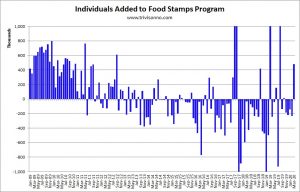 The massive spike in September & October 2017 was due to the massive hurricanes that struck the USA during that month. The spike of 3.4 million people distorted the chart too much, so I fixed the y-axis at 1 million so that the overall trend can still be seen. The spike would be much, much higher if Puerto Rico were in the SNAP program, but it is not. Instead, Puerto Rico gets a block grant to fund its own Nutrition Assistance Program (NAP), which fed about one-third of the island before Hurricane Maria. There are 3.4 million people in Puerto Rico, so if they were part of the SNAP system, the October 2017 bar on the chart above could conceivably go up another 3 million.

The jump in September 2012 was due to Hurricane Isaac.

The spike in May 2011 was due to a surge in Alabama after an historic onslaught of giant tornadoes devastated the state. According to the USDA, about 1 million disaster victims from several states were added to the rolls.

The next chart shows the percentage of Americans on food stamps (using FRED’s “POP” data series): 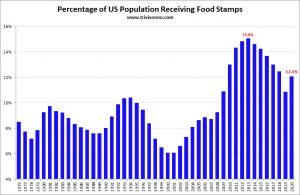 The next chart shows the monthly amount paid to recipients. Starting from $6.63 in 1969, the amount has risen steadily, primarily due to inflation. However, the amount has dropped a bit since the peak in 2011: 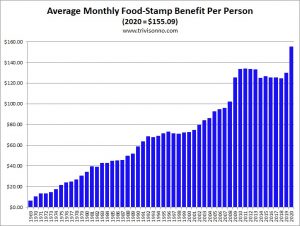 The next chart shows the total annual benefits paid out. At $60.6 billion in fiscal 2018, this is a major program: 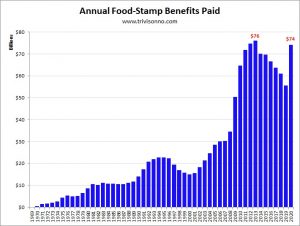 A program with this many participants incurs huge administrative costs: $4.4 billion in 2018 – and that is only the federal government’s share. In addition, each state spends money to administer their end of the operation. The chart shows only federal expenses: 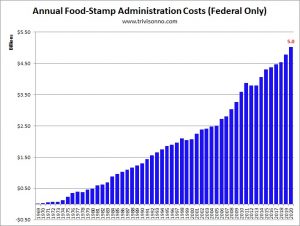 The next chart shows the breakdown of participants by race (see table A.21 of this USDA report): 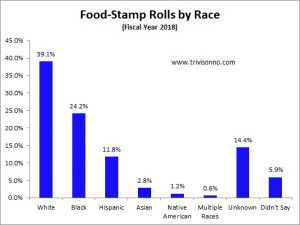 The next chart shows the number of individuals added to, or subtracted from, the food stamp rolls highlighted by presidential administration: 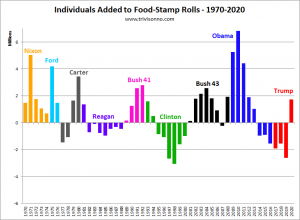 The next chart shows the numerical totals for each president. Keep in mind that not all presidents were in office for the same number of years:

Notes
Note: The numbers for Presidents Trump, Obama, and Bush (43) are higher than they otherwise would have been because the government started to use food stamps for disaster relief starting in 2005 for Hurricane Katrina. However, keep in mind that poor people are more vulnerable to natural disasters. Imagine a union factory worker in Ohio making $28 per hour, and a non-union factory worker in Florida making $8. Then they are both victims of a natural disaster. Which one is more likely to end up on food stamps? The worker in Ohio probably has some money saved, while the worker in Florida was living paycheck-to-paycheck. So, one could argue that the fact that food stamps are needed for disaster relief is itself evidence of a very high level of poverty.

Note: The annual totals used above are based on the federal government’s fiscal year, which begins in October.

Note: States are allowed to deny food stamps to convicted felons. Different states have different policies, however it doesn’t effect their expenditures either way since the USDA pays for all food stamps.

Note: The March 2012 numbers are slightly elevated due to disaster relief for windstorms that occurred in February and March 2012. However, the USDA did not give exact numbers, possibly because “congregate feeding” methods were used.

Note: The Obama Administration loosened the ABAWD (able-bodied adults without dependents) requirements. So, that accounts for a small portion of the increase in food-stamp usage. This action was similar to extending unemployment benefits due to the poor job market. See this report from the Congressional Research Service for more information.

Note: See this page for the history of the food-stamp/SNAP program.

Note to bloggers: You may use any of the charts on this page on your blog as long as you include a link to this page. No hot-linking please.

Bulletin: Because of the government shutdown, the data appears to be screwed-up for January and February of 2019. The totals released are 39.1 million and 7.3 million respectively, which couldn’t possibly be accurate. Until this is fixed, I am using estimates that fit into the downward trend of 37.0 and 36.5 million respectively.