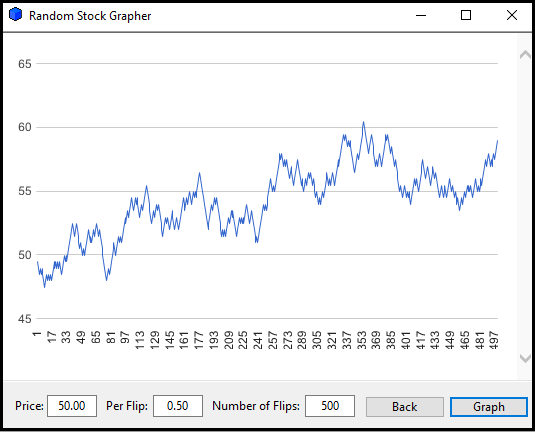 RSG uses the Google Chart API, so you need to be connected to the internet to use it.

In his book, A Random Walk Down Wall Street, Princeton economist Burton Malkiel wrote that stock chart-patterns are an illusion, and described an experiment to support his theory:

“The persistence of this belief in repetitive stock-market patterns is due to statistical illusion. To illustrate, let me describe an experiment in which I asked my students to participate. The students were asked to construct a stock chart showing the movements of a hypothetical stock initially selling at $50. For each successive trading day, the closing stock price would be determined by the flip of a coin. If the toss was a head, the students assumed that the stock closed ½ point higher than the preceding close. If the flip was a tail, the price was assumed to be down by ½.”

Malkiel went on to claim that charts produced by this method look remarkably like normal stock price charts. He only provided one example, and I wanted to see some more, so I wrote this app. RSG uses a random-number generator to simulate coin flips, and can make random charts far more swiftly. So, you can view random charts as fast as you can click the “Graph” button.

I provide this free app to promote my book: The General Theory of Day-Trading.