Continuation Gaps occur during strong trends, and are also referred to as “Runaway” and “Measuring” gaps. During strong trends, prices look like they are “running away” because pullbacks, if any at all, are brief and shallow. And since continuation gaps often occur at the halfway point of a trend, we can use them to measure the ultimate length of the trend.

Here is a 60-minute SPY chart showing the continuation gap from November 9, 2009 (click to enlarge): 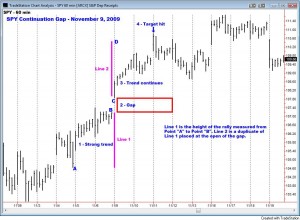 The low before the trend begins is on November 4th at Point “A” on the chart. SPY advances relentlessly for two days to Point “B”. So, we have our first requirement: a strong trend.

On the morning of November 9th, SPY gaps up (red box), leaves almost the entire gap unfilled, and continues to rally sharply. And we have our second requirement: a sizable gap.

To estimate the destination of this trend, we measure the extent of the first leg from Point “A” to Point “B”. Start measuring from the point where prices first took off, and stop at the close of the day before the gap. That height is shown as “Line 1” on the chart.

On the day the gap occurs, you can duplicate “Line 1” on your chart to make “Line 2”, and then drag it so that it begins at “Point C” which is the top of the gap. The top of “Line 2” is the measured target for the trend, “Point D”.

In this example, the target was hit two days later (and exceeded a little bit) at the blue arrow on the chart. Notice that the trend promptly came to an end after the level of “Point D” was attained. SPY then pulled back and consolidated for the three days.

The next chart is a bearish continuation gap from October 6, 2008. It shows only the first hourly bar on the day of the gap. Here I drew a Fibonacci grid from the previous swing high such that the center of the gap was placed at the 50% mark. Then the 100% level of 101.70 became the target: 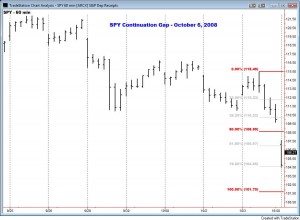 And later in the day, SPY did indeed hit the target: 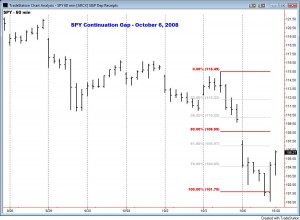 So, that’s a different way of projecting a target than the lines used in the first example. Now, let’s look further at this gap.

Whenever you have a large gap that is accompanied with a surge of volume, you have a serious event because it indicates that large players are making large moves.

Here is the same chart as the one above with volume added: 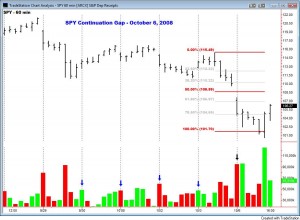 After SPY opened, it continued to plunge on heavy volume. The black arrow points to the volume of the first hour of trading. Notice that it was almost double that of any of the previous few days (blue arrows). That was a significant event, so we want to look at the bigger picture. Now we will go onto the daily chart and draw a Fibonacci grid such that the gap falls at the 50% level from the last swing high: 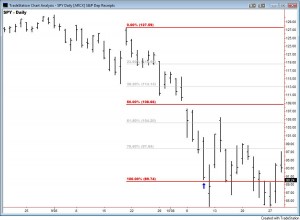 That exercise gave us an 89.74 target for SPY, which it did indeed go on to hit. Now, look at the blue arrow. The trend came to an end, and SPY began to consolidate in a range, as soon as SPY came near the gap projection. 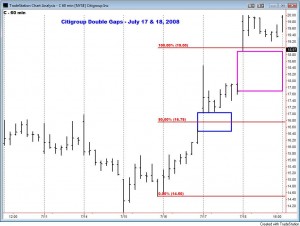 On July 17, 2008, you might have projected a target of 19.00 from the morning’s gap (blue box). But then the next morning, Citigroup gapped right up and over your target (purple box). That was a very powerful move, so you would have wanted to update your target. The way to handle this situation, according to the textbook, is to put your midpoint between the two gaps.

In this case, I drew a green box from the opening of the July 17th gap to the bottom of the July 18th gap, and then placed my 50% level in the center of the box. That raised the target from 19.00 to 20.85. Citigroup topped out a bit higher than that, but it worked out pretty well: 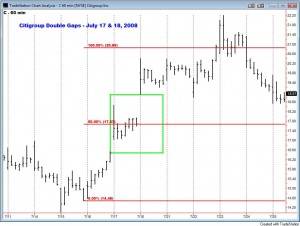 Identification
How can you tell a continuation gap from other types of gaps? One clue is when you have a strong trend that has not had any substantial pullbacks, and has not yet made any gaps. In that scenario, the relentless price movement makes a “gap and go” day a good possibility. If a powerful catalyst occurs before the open, then that increases the odds even more.

If you liked this page, then you will love my book: The General Theory of Day-Trading.