Exhaustion gaps (discussed on page 223 of the textbook) occur at the end of powerful trends. This 60-minute SPY chart shows the exhaustion gap that occurred on June 21, 2010 (click chart to enlarge): 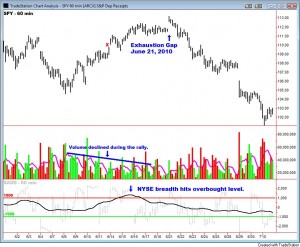 Notice how SPY gapped-up that morning and then proceeded to immediately roll over and close lower.

An exhaustion gap does not guarantee the end of the trend, but at least a slowdown or pullback.

The June 21, 2010 exhaustion gap did not occur on high volume. However, that is because it occurred in the context of a larger downtrend after a volume crescendo had already occurred a month before: 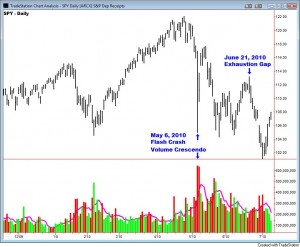 Looking back up at the first chart, you can see that the rally was suspect because the volume had been declining throughout. Larger players were not accumulating shares. (The purple line on the volume chart is a five-hour moving average).

The third panel on the first chart shows a moving average of NYSE breadth, which I like for identifying overbought/oversold conditions. On June 21st, the market had made a recent overbought peak and breadth had begun to deteriorate. So, there was reason to suspect the gap.

Now look at the red “x” on the first chart marking the June 14, 2010 gap. That gap looked a lot like an exhaustion gap, however it was not confirmed by the price action the next day. Nevertheless, if you had gotten out of long positions at that time, you would have been in good shape when the market dove a week later. That gap was a warning that the trend was suspect because a powerful trend will not fill gaps so quickly.

Here is a 5-minute chart from June 21, 2010 showing QQQQ and IWM along with SPY. The red arrows point to the spot where each closed its gap. Notice that both QQQQ and IWM gave you advance warning that SPY would likely close its gap. The IWM gave you over two hours warning: 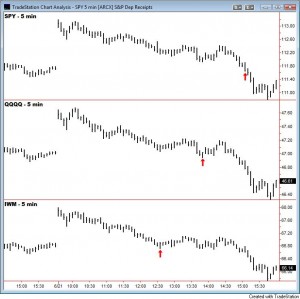 The behavior of the overnight futures often gives us a clue as to the character of the next day’s trading. In this case, the SPX futures (ES) gapped-up at their 6pm EST open the night before, but a couple of hours later plunged. See the blue box: 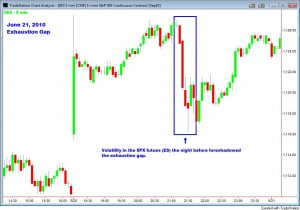 That type of volatility is characteristic of a turn rather than a continuation of the trend. Bullish behavior would have been to gap-up and then grind higher or go flat. While the futures recovered from that plunge, it did indeed foreshadow the exhaustion gap the next morning.

On the SPY daily chart, the ominous connotations of the exhaustion gap were confirmed by a bearish engulfing candlestick: 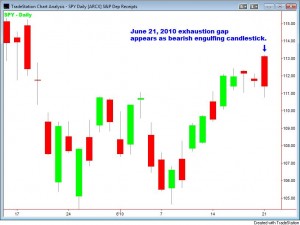 Now let’s look at an exhaustion gap that signaled a bottom on March 17, 2008: 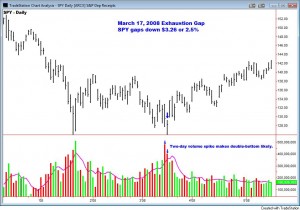 This gap had a volume crescendo of a magnitude that matched that of the crescendo which occurred two months earlier at the January 2008 low. That surge of volume was a signal that a double-bottom pattern might be forming. 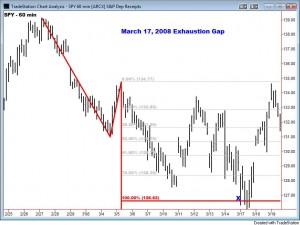 This 1-minute chart shows an immediate gap-fill attempt, which was a clue that the gap would not be of the continuation or breakaway variety: 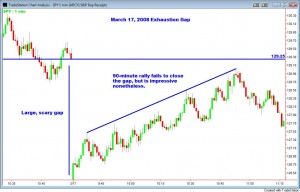 That attempt failed, but later in the day, SPY did close the gap, if only by a penny: 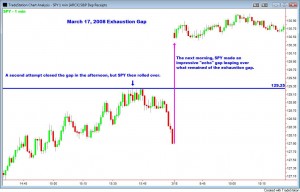 The next morning, SPY made an “echo” gap up-and-over the what remained of the exhaustion gap and went on to rally. That echo gap remained open for over three months – until June 26, 2008.

Conclusion
Whenever a powerful wave occurs, powerful emotions will likely build with it. And those emotions may reach a crescendo days later in the form of an exhaustion gap.

For more discussion of gaps, see my book: The General Theory of Day-Trading. For example, it has a fascinating theory of mirror-gaps.