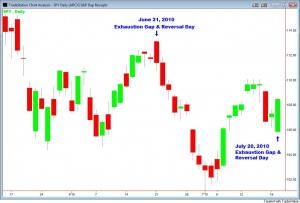 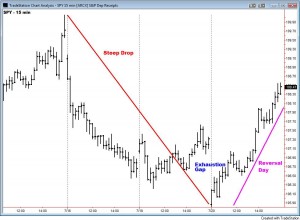 The gap and prior trend are not required since the market can plunge down in the middle of the day and then bounce back (and vice-versa). But if there is a gap, then we can use it to verify the reversal. This next chart from July 20, 2010 shows SPY, QQQQ, IWM, XLF, DIA, and XME with their gaps highlighted by red boxes:

The XME closed its gap very quickly, but the rest of the ETF’s didn’t do so until the afternoon. DIA was the last to escape its red box, lagging by ten minutes or so. However, once the gap-filling was unanimous, the odds of the market rallying into the close increased substantially. Normally, gaps will fill pretty quickly in the morning, if they are going to fill at all. When you see gaps getting filled in the afternoon, then you know something is up.

We also want to see breadth reverse. Here is a chart of NYSE breadth from July 20, 2010. Notice how it attempted to cross above zero in the morning and failed, but then punched through in the afternoon: 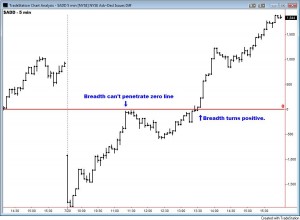 Just like the ETF gaps, we also want to look for breadth agreement amongst the indexes. For example, on July 20, 2010, NASDAQ-100 breadth wasn’t able to hold above zero until after 3:00pm. But once it did, a ramp to the bell was almost guaranteed: 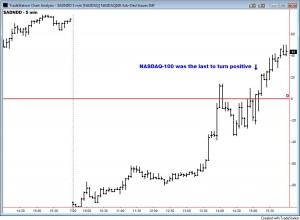 See how many breadth indicators your software provides. If you use TradeStation, you have: $ADD, $ADQD, $ADRLD, $ADSPD, $ADNDD, and $ADID for the NYSE, NASDAQ, R2K, SPX, NDX, and Dow respectively.

We also want to see a pick-up in volume. A market reversal usually involves a battle between longs and shorts which increases volume. At a major top or bottom, you often see a huge amount of volume. SPY volume picked up on July 20, 2010: 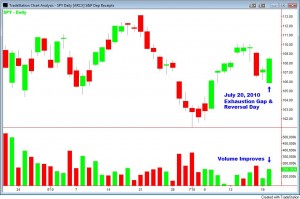 As the day progresses, check the volume of each of the major ETF’s. Ideally, they will all be well in excess of the previous day.

And finally, we want to be alert for reversals in overbought and oversold conditions. There are a variety of indicators for this, and in the lower panel of this chart, I use a moving average on NYSE breadth to show the oversold condition that existed before the reversal day on July 20, 2010: 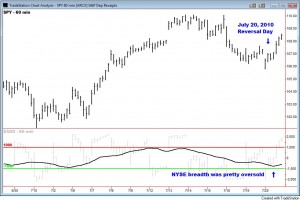 The market can rampage right through overbought/oversold conditions, especially when the general public is buying, or selling, in a panic. But normally, it pays to look for a reversal.

For more “day types” see my book: The General Theory of Day-Trading.