The “9-36-15 Cross” technique gives a buy signal when the 9-period moving-average crosses above the 36 average on the 15-minute chart. I coded a TradeStation strategy to implement it for SPY with the following day-trading rules: 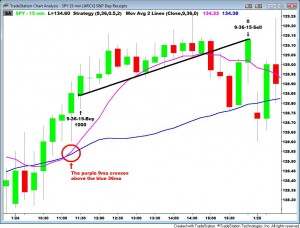 The cross-up occurred on the 11:15am bar (red circle) and the strategy opened the trade on the next bar. SPY didn’t hit our $2 target, so the trade was closed before the bell with a small profit (follow the black line). 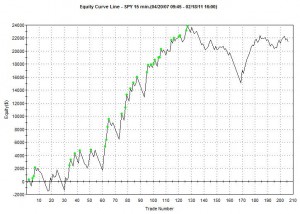 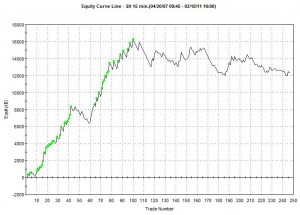 Not too shabby, right? Amazingly, using this mechanical technique, you could have made money during this period by being a bull or a bear.

The 1pm deadline is just to prevent the strategy from putting a trade on late in the day when you are just going to be closing it soon anyway. A computer needs such an arbitrary time. In practice, making your trades by hand, you can let it slide, of course.

When doing these tests, I just set the stop-loss amounts and profit-targets to what seemed reasonable. Other settings might be much better. I could run the strategy through the optimizer and produce much more impressive results, but I don’t recommend that. It’s best to think of an optimizer as more of a hypnotizer. Stock charts are like snow flakes. That beautiful snow flake that you found with your back-testing will never occur again, so there is no point in looking for it.

Both examples above use a $7.95 commission per trade.

You can look over the stats with the spreadsheets that TradeStation spits out:

If you like this trading strategy, then you are going to love my book: The General Theory of Day-Trading.