If you are an experienced trader, you have probably heard of the New York Stock Exchange’s TICK indicator. Well, you might be interested to know that the Dow has its own such indicator called the TIKI, which reflects only the activity of the thirty Dow stocks. Here’s an example (click chart to enlarge): 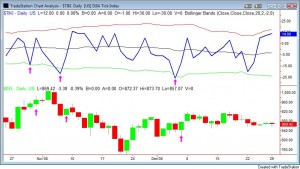 Buying the open and holding until the close the day after the TIKI hit the lower Bollinger Band would have given you three winning trades over the two months shown on the chart. This happens because TIKI extremes usually reflect overbought/oversold conditions.

For an extensive discussion of the TICK, see my book: The General Theory of Day-Trading.