The stock market has been repeating the same patterns over-and-over for a hundred years. Why don’t traders wise-up? Because the patterns are an expression of human nature. Let’s take a look at an example.

Here is a one-minute chart of the S&P 500 futures (symbol: ES). Click the chart to enlarge it: 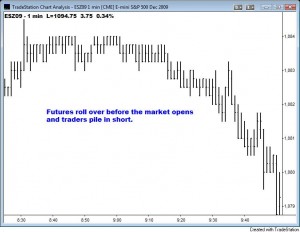 The market had been rallying for seven straight months, and many traders were eager to sniff out a top. So, on the morning of October 15, 2009, JPMorgan released earnings, and the important retail-sales report was released. The market seemed dissatisfied with the news, and many traders thought: “Ah ha! Here’s the top” and they piled in short.

Since the market fell quickly, these traders immediately had profitable trades. Even worse, they felt vindicated. Thinking they had caught the exact top, their egos inflated until they could be seen from outer space.

So, when prices started to bounce up a bit, they thought: “It’s just a retracement; prices will turn back down soon.” 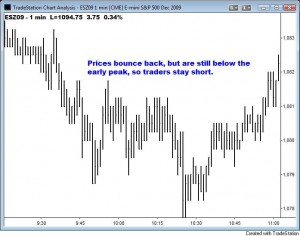 And sure enough, prices did turn back down. Now those traders felt vindicated again, and relaxed, dreaming of all they money they would soon be reaping: 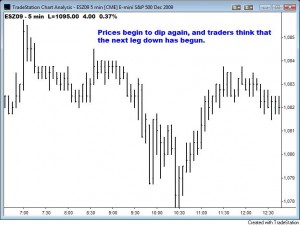 But then something went horribly wrong: prices turned back up. As their profitable trades went into the red, traders bought-to-cover in a panic to minimize losses. And their buying completed an “Inverted Head-And-Shoulders” reversal pattern: 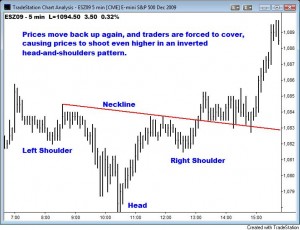 The same patterns repeat over-and-over again because there is something about them that is seductive to the human mind. Many traders, especially ones with large egos, will get caught in these patterns.

In this case, once it became clear that a reversal pattern was forming, a trapped short could have flipped his position, gotten long for the rally, and perhaps even made a small profit, though that would have taken a flexible attitude.

These patterns will continue to repeat. If you learn to recognize them, you will do well. But only if you maintain a flexible, ego-less attitude so that you can identify the pattern, rather than explain it away because it doesn’t fit your prediction for the market.

Also, instead of just looking for patterns, try to think about what the current pattern may morph into.

UPDATE: Since I wrote this post, I developed a full-blown theory of chart patterns, and wrote a book called The General Theory of Day-Trading.